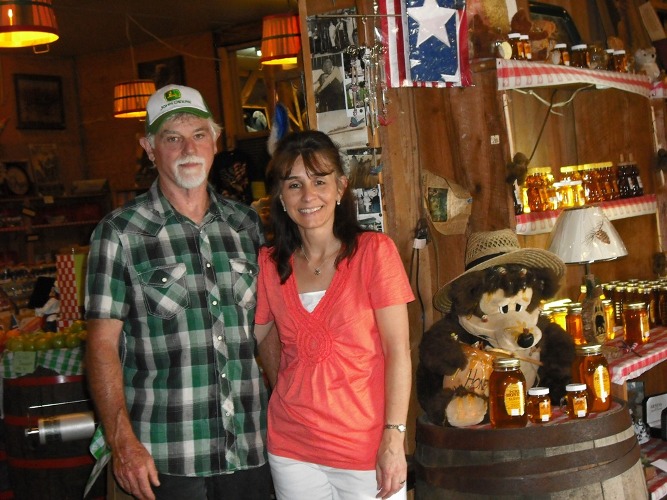 The Days Of Small Beginnings

Zec. 4:10 instructs us not to despise "the day of small beginnings." When we despise something, we take it lightly; we disregard it and count it as nothing. When we are believing God for something "big", we need to remember that great things start small. We need to appreciate "the day of small beginnings," because the little things will grow if we recognize them, appreciate them, and honor them as gift's from God and indicators of greater things to come.

The Poor Farmer, Ronnie Greene; began farming at a very early age. He was 10 years old when he had the idea to build a chicken house, raise chickens, and sell them to a local restaurant that was owned by his parents in Chesterfield, Virginia. Even at this age he was full of wisdom and many ideas. While Ronnie was in college he moved to Patrick County and settled in the Laurel Fork community with his parents, and began dairy farming, and later went into vegetable farming. Vegetable farming is something he enjoyed with all his heart, and over the years he had many hired hands helping him.

In the early 80's The Poor Farmer, Ronnie Greene; was growing acres & acres of vegetables on a farm in the Ballard area of Patrick County. In the fall of 1982 Ronnie ask Wilodean McAlexander, who at that time ran Meadows of Dan Food Market, if he could set up beside the food market and sell his home grown produce; she was very kind and allowed him to do this. Ronnie and his son Jason began to sell his home grown mountain produce off the back of a wagon that first season in 1982. The next season in 1983 they thought they had hit the top, they built a shed on top of a truck bed, and began to sell his home grown produce along with lots of local honey and canfoods. This little vegetable farm stand was a success. The tourists coming to the mountain, and off the Blue Ridge Parkway found the Poor Farmer's little produce stand and responded so well to it, that his customer's were taking up most of the parking space in the parking lot. He knew then that his little business could not stay where it was for much longer.

In January 1984 Ronnie leased & renovated the old gulf service station across the road from Meadows of Dan Food Market. This old gulf service station use to be managed by my uncle, Douglas Puckett. It took two long months of renovations. He had several people helping him but the main one was Jose' Flores. He was Ronnie's right arm on the farm for over 20 years. The grand opening was March 1, 1984. Ronnie then had a bigger and better location to sell his produce and other unique items. Unfortunately, The Poor Farmer is no longer affliated with this location he started in 1984. 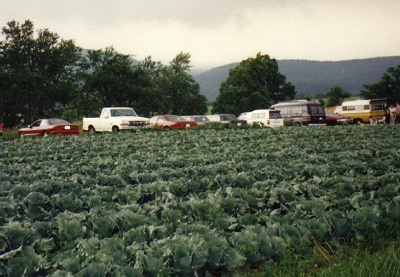 Mountain Cabbage grown on our farm in Vesta!


In 1985 Ronnie purchased 225 acres of farm land in the Vesta area, which was originally apart of the old Circle M Zoo property. He immediately started farming on his new mountain property, which to this day yields the best home grown mountain cabbage you will find anywhere! The same year, he built an Old Fashion Country Store with a greenhouse attached, and called it "Poor Farmer's Farm". The old saying goes something like this, "The Poor Farmer was poor no more!" People would drive from miles away to purchase his home grown mountain produce! All his customer's loved the old fashion country store atmosphere while they browsed through all the unique items that represented days gone by. 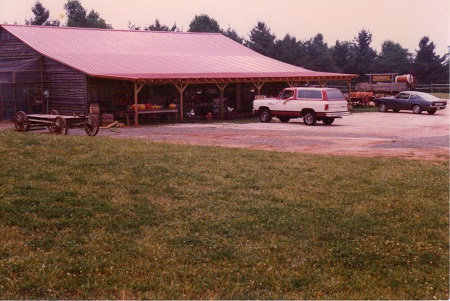 Poor Farmer's Farm in May 1985. The year we opened for business!

Bill Monroe and other famous bluegrass groups sang on the "Back Porch Bluegrass" Stage, that Ronnie and Jose' Flores built in 1986 below our country store. In 1989, Hurricane Hugo demolished the music park. Later in 1989, the Poor Farmer's built a music shed beside the store to continue on with the "Back Porch Bluegrass" shows on Sunday evenings. The music shows drawed such large crowds that it was taking up all the store parking, so we had to make other arrangements. In 1994, we had an outdoor gazebo built above our store for our bluegrass shows. Mr. Hickey, who was 70 years old at the time built this beautiful gazebo for us. All the logs that were used to built this gazebo came from our mountain land! This makes it very special to us.


Bill Monroe sang on the "Back Porch Bluegrass" Stage!

"Back Porch Bluegrass" in music shed beside our store in 1989!

"Back Porch Bluegrass" in Gazebo above our store in 1995!

"In the Spring of 2014' the Poor Farmer's built a new "Front Porch Bluegrass Stage" facing the front porch. Now, our customers can sit on the front porch and enjoy the bluegrass and old time music, along with the beautiful mountain scenery!

Ronnie and I are keeping the mountain tradition of bluegrass and old time music alive by having special bluegrass events at our store in the summer and fall.

We have made alot of changes to our country store over the years! We now have several greenhouse's where we grow most of our plants. Each spring our greenhouses are packed full of beautiful blooming plants. In the fall, we grow our own mums. We have more than doubled our store in size, and we have many unique gifts and food items to choose from, but on a larger scale than before. We are definitely the store that has something for everyone!

As Ronnie & I look back to the days of small beginnings, we realize that great things start small, and we honor and appreciate them as gift's from God and indicators of greater things to come.

Mr. & Mrs. Poor Farmer, Ronnie & Joyce Greene, welcome you all to come visit their farm, and browse through their old fashion country store located in the Vesta area. We are located 1/2 mile West of Lover's Leap Wayside and 1/2 mile East of Primland Resort on U.S. Rt. 58.